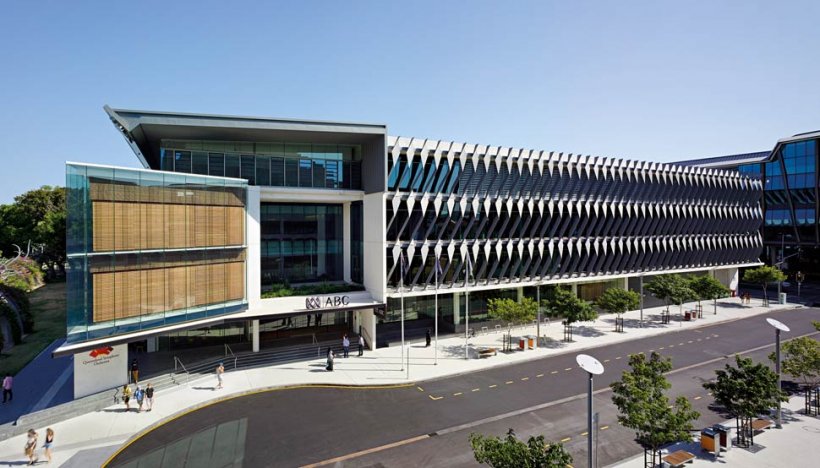 With distinctive steel cladding that dances its way along the building’s northern and western facades, it appears that ‘Aunty’ is young once again.

The cladding on the new Australian Broadcasting Commission building in Brisbane’s South Bank is part of the language of layered shading that is common parlance in tropical architecture, and which architect Richard Kirk’s practice embraces in projects in Australia, Malaysia and Singapore.

Deeply carved reveals, open atriums, generous overhangs and a series of operable skins salute the simplicity and pragmatism of a design ethos that viscerally responds to the environment. “Our buildings are about the climate,” says Kirk.

The four-storey ABC building sits on a pivotal corner site at the intersection of the playground that is South Bank and the city’s cultural precinct.

The chiselled-out entry foyer is a pivot between two street addresses. The different treatments of the external facades emphasise the two addresses and functions.

“The fabric of the building is conceived in two parts,” says Kirk. “The blades are the urban side, and the transparent glazing faces the Parklands.”

The distinctive steel cladding that dances its way along the northern and western facades of the building is part of the language of layered shading that is common parlance in tropical architecture.

The three tiers of east-facing office space are visible from the Parklands through floor-to-ceiling glass. A cantilevered corner projects beyond the rigid rectangle of the building and houses two levels of broadcasting studios. The prow-like projection makes these spaces a voyeur’s delight, enjoying a transparency uncommon to the genre. A layer of adjustable aluminium blinds that automatically track the sun drapes over the triangulated glazing and continues along the southern elevation.

Along the northern and western elevations – the “second” street address – a striking pattern of blades made from 10mm high-tensile XLERPLATE® grade 350 BlueScope steel gives the building its strong identity and has inspired its nickname: the “Alessi cheese grater”. The moniker, true to a characteristic Australian humour that combines sledging with perspicacity, aptly tags their practical application as much as their stylish elegance

The blades, which recall the bends and tilts of the many surfaces in the building designed to deflect sound, also act practically as sunshades. In-situ post-tensioned concrete floor slabs project beyond the facade to assist in shading and provide the bases for attaching the blades.

Kirk initially designed the blades in weathering steel, but the clients preferred a thicker profile in the high-tensile grade 350 steel. The steel sheets from which the blades are made measure 600mm wide by 4.5 metres long, so zero wastage was achieved in slicing three columns from each of the nine-metre sheets. The XLERPLATE® grade 350 steel is folded through the simple mechanics of being fed through a brake press. Besides the astounding economy, Kirk enjoys the “legibility of the material, and its primal quality. The facade moves as you walk along the street – it is static, but the shadows move.”

Fixings are made from 12, 16 and 20mm XLERPLATE® steel, requiring much tolerance for the movement of the building. Kirk praises the ingenuity of steel fabricator ACLAD's shop drawing process which determined the tolerance factor. At Kirk’s practice, the folds were experimented with more manually, by hand-folding paper card. The thinness of the material is crucial, and an origami crispness was achieved in the pattern. “We had to be careful about harmonics too,” says Kirk, “and make sure the blades were rigid enough not to cause vibrations. And another satisfying outcome was that steel was proven to be the most cost-effective material to achieve the desired results.”

The sheer blade of the LYSAGHT TRIMDEK® profile roof responds to the simple elegance of the elevations. Made from COLORBOND® steel in the colour Windspray®, the 0.48mm-thick roof slice folds its way over deeply recessed gardens and verandah spaces on the top level. It is an elegant lid to a discrete building.

The Multi Production Studio (MPS) is a unique facility on the ground floor that is shared with the QSO and is able to morph between a full recital hall and an acoustically ‘dead’ television studio, according to needs. The 14-metre-high ceiling supports sound treatments that tilt and move up and down, as well as accommodating a 250-strong audience.

The ability to cater to one soloist or to a full orchestra, then adapt to a recording of Q&A is emblematic of this gymnastically responsive building. It appears that Aunty is young once again.