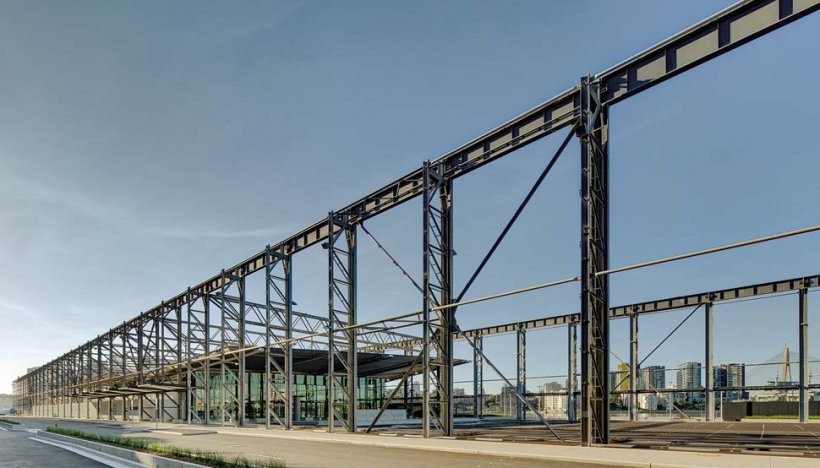 An historic part of Sydney’s working port has been reinvented as a new cruise terminal, giving visitors an unexpected perspective on the city.

Arriving at White Bay Cruise Terminal, one is confronted by an altogether foreign view of the city that takes in Sydney Harbour Bridge and Anzac Bridge – and everything in between – in one sweeping gesture.

Of course, if there was a 13-storey-high cruise liner in port, you’d see only glimpses – with the full panorama observed from the ship deck itself. There is no such disappointment for people lucky enough to enjoy the new terminal when it operates as a function centre on non-ship days.

Providing flexibility to accommodate different uses was one of the key objectives of the brief, according to project director Paul van Ratingen from Johnson Pilton Walker Architects (JPW).

“The brief’s proposition was that the whole site be cleared, but on our first visit here we were captivated by the 1960s gantry structure,” he says. “It’s exceptionally powerful, it’s very beautiful in its weathered state, and it’s very relevant to the history of this site. We felt it was an important part of Sydney’s maritime heritage, and that we really needed to look at keeping it.”

In the 1960s the giant gantry crane was erected for the world’s first regular international containerised shipping service, which operated between Sydney and Europe.

“The 1960s structure had been added to progressively as uses changed from storage to other things, so there was already a strong story of adaptation of that structure, and its new use as a cruise passenger terminal is a continuation of that,” van Ratingen says. “We saw this new use as another overlay to that structure, rather than erasing it and starting again.”

van Ratingen and his colleagues convinced their client – Sydney Ports – to incorporate parts of the gantry into the new building. Their concept aimed to drape a new metal roof between the two rows of columns, anchor the building back into the cliff with a series of amenities pods, and open up to the harbour views with full-height glass walls on three sides.

“It’s interesting to not have to support a roof on columns, but to have a gantry structure that you can drape a roof from,” van Ratingen says.

Having determined that the gantry could be repurposed, van Ratingen envisaged only one material for his new overlay.

“From a conceptual point of view, the context required steel: it’s a steel building that we started with, and it’s a tough and very harsh marine environment,” Van Ratingen says.

“Its suitability is evidenced by the original structure that – now nearly 50 years old – is still in good condition.

“Also, for the spans, the most efficient material to work with is steel, and because of its lyrical form, steel was an obvious choice to achieve the spline curves by rolling the major purlin elements.”

Working with structural engineers, the architects explored several options before settling on a roof structure of curved tubular steel trusses and purlins made from BlueScope steel. These span the gantry columns, with the roof sheeting suspended below them.

The simple and elegant roof provides an extremely flexible and large column-free space internally, with all of the building’s inner workings contained in the pod-like structures stacked along the northern edge. These shade the building in summer and reference the shipping containers that previously populated the site.

The building owes its success to the extensive collaboration between architects and engineers, which brought the vision to life, van Ratingen says. The Fielders ARAMAX® profile roof made from aluminium may appear to billow and lift in a random, asymmetric wave, but it plays several functional roles, including thermally, acoustically and from a fire engineering perspective.

With the building now complete, the process of adapting an important part of Sydney’s working port for its next life has been immensely satisfying, van Ratingen says. In its current iteration, it could serve as a cruise terminal and public venue for 25 years or more, but he hopes there is life in it beyond that.

In the meantime, he’s delighted that – in spite of its vast dimensions and semi-industrial location – the terminal is an enveloping and hospitable place. “The challenge was always to make this a warm and welcoming space for international and domestic visitors, as their arrival point into Sydney,” van Ratingen says. “We are really thrilled with how beautiful it is at any time of the day or night. That’s a combination of the views outside and the folding roof that at the same time gives intimacy and drama.”