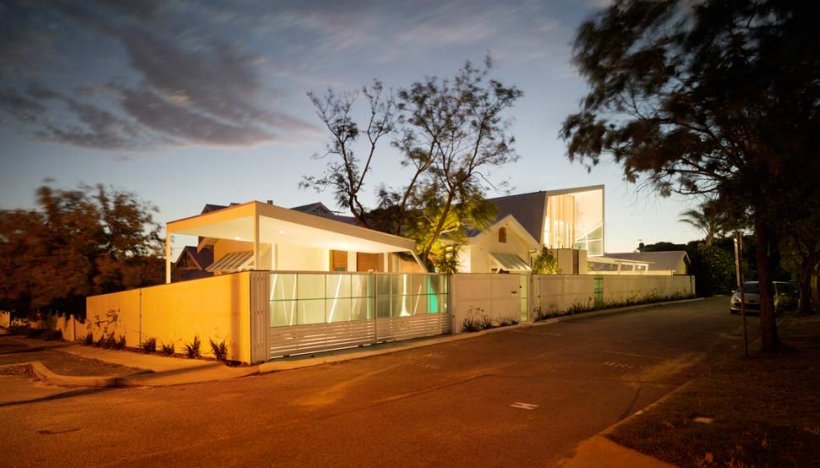 Iredale Pedersen Hook has taken an ‘archaeological’ approach and selected sympathetic materials to make an arresting addition to a suburban Perth house.

Architect Adrian Iredale embarked on a renovation project for some old friends that would take on a special significance as his last alteration and addition job, bookending more than 30 renovations undertaken in his first 10 years of practice.

The Swan Street House typifies Iredale’s ‘archaeological’ approach to renovations, where he aims to “understand the existing building and find something to respond to”. The 1930s cottage occupies a corner block in a suburban street, where corrugated iron roofs outnumber their tile counterparts by two to one.

Drawing on his experience of designing renovations, Iredale presented several schemes to the clients before they settled on the eventual solution.

Iredale stripped the house back to its original plan before adding a second story. The new structure may appear confronting at first glance – with its folding LYSAGHT CUSTOM ORB® profile roof made from ZINCALUME® steel that starts at the carport, then rises over the single- and double-storey sections before folding down to become the western wall – but it was derived from the suburban context, Iredale says.

“We wanted to introduce a two-storey building that responded to the pitched roof language of the surrounding houses, many of which have steel roofs, and it was important to tie the new section to the older part so the roof appears to be extruded and folded out of the original house.

“The roof became the most important element of the design,” Iredale continues, “because the interior spaces are all about experiencing that external folded form”.

Rather than complicating the approval process, Iredale says the LYSAGHT CUSTOM ORB® roof made from ZINCALUME® steel was perceived as a positive addition to the streetscape. “It was clear to council that we were trying to find a contemporary solution that was drawn from the existing house and derivative of its context,” he says, “so it was welcomed as a unique approach to dealing with old stock to create a decent-sized family home”.

The folding steel roof performs other functions too: on the western elevation it is pulled down to act as a parasol wall made from lightweight steel. “Here, the western sun is excluded from the bedroom and ensuite by the parasol wall, which allows the south-westerly wind to filter through for ventilation, and also provides privacy and shading to the lower level.”

It was obvious from the outset that the roof could only be built in steel. “The Swan Street house has a tension between the floor plan and the skin, because the inner part is orthogonal and the perimeter edges are folded, so the spatial dynamic shifts in every room: no two spaces share a simple geometry,” Iredale says.

“We needed a steel product to achieve that complexity in an economical way. Steel wasn’t an indulgence in terms of the budget,” he continues. “It’s the most affordable roofing and walling material available, but it enables us to achieve complex forms. We like to use traditional materials that are appropriate contextually, and that are known materials for tradespeople to work with, but we use them in extraordinary ways.”

Aside from the complex roof, the remainder of the build was relatively straightforward, comprising a structural steel frame in-filled with reverse brick veneer walls and clad externally with plywood.

As his renovation swan song, Iredale has built a welcoming family home that unifies with its neighbourhood and, in the process, an enduring friendship with his clients.