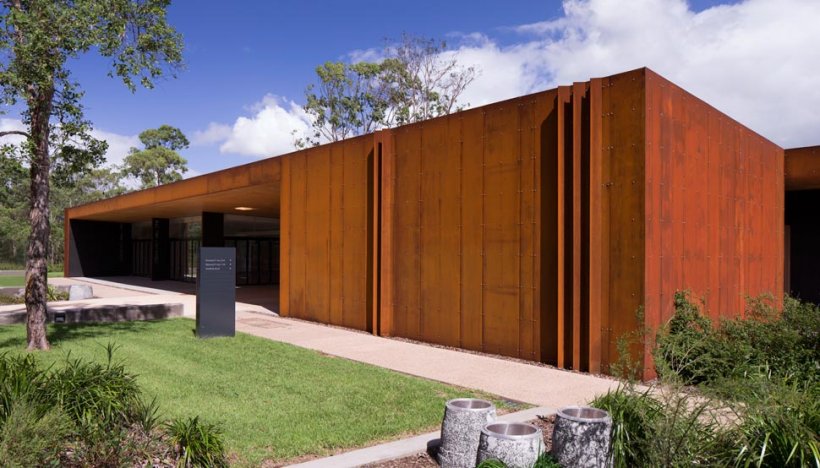 Using weathering steel to reference the site’s former role as a dumping ground, Richard Kirk Architects’ sculptural response for a new community space asserts the importance of place and poetry of raw materials.

Emphasising the importance placed on developing a strong sense of community, Richard Kirk Architects (RKA) was briefed to design the Fitzgibbon Community Centre well before the suburb's housing and other infrastructure existed.

In a suburb that was conceived as a benchmark for low-cost housing and sustainability, the use of REDCOR® weathering steel is apt.

The site, a swampy patch of redundant farmland, had become a dumping ground for old fridges and cars. A couple of rusted car hulks, one piled on top of the other, gave Kirk his inspiration for the building, and its extreme sense of materiality.

"I think of the building as a bit of land art, or a sculpture in the landscape – it has a very abstract quality. We used the weathering steel as a reference to the discarded objects that you find in these parts."

The building has a monumental quality that contrasts strongly with the articulated and multi-storey structures of the surrounding suburb. Its isolation on the edge of the town, with a backdrop canvas of bushland, heightens the object-in-the-landscape effect.

The blank, solid steel walls that allow no interior views add to the structure's mystery and gravitas. The one major view through (rather than into) the building is made via the large portal in the core of the 60-metre-wide elevation, acting as both guide and frame into the bush behind. The covered portal space appears as a shell or remnant of what might have been part of the solid structure, and is used for communal gatherings.

The portal divides the simple plan, with a hall to the east and offices and community services to the west. A cafe, yet to be occupied, sits between the two and opens to the undercover courtyard. Holes are punched into the hoop ply-lined canopy for extra light and the odd glimpse of stars at night. The signage along the portal's fascia is stencilled into the rusted metal, reminiscent of a bit of ardent handiwork from a high school metalwork class.

The cladding made from BlueScope REDCOR® weathering steel acts as a rain screen and, notes Kirk, will require zero maintenance. "The last thing we wanted to do was use materials found in the houses," says Kirk. "This is a public building, and must clearly be so. It needed to have a strong sense of identity – to make a strong statement."

The oxidised armour of REDCOR® weathering steel "did everything for us," he says. "It can play all these different roles." As a light metallic skin that shades the internal thermal mass of the building, heat can escape from the gap behind the epidermis. Where the strips forming the outer colonnade were folded and twisted, the material gains strength.

The folding of the REDCOR® steel members, achieved through the use of a brake press, is an economical solution that delivers a strong language and much evocative power in its repeating linear pattern. The folds in the steel register the weather (reddening during rainy seasons) and also the sunlight as it hits the surfaces.

Light and shade have a key role to play in the building's expression, which takes primacy on the relatively small site. The folded blades, for all their strength and ruggedness, act as a protective veil to the building.

"We had created folded metal before, in the ABC building at South Bank," says Kirk. "But that was aluminium. With its three-millimetre thickness and the fact that the folded panels are rigid, this required the most fundamental metalworking."

The LYSAGHT LONGLINE 305® profile made from ZINCALUME® steel is pitched to the street on the south, and wide fascias conceal the guttering. The LONGLINE 305® profile was chosen for its ability to span wide areas and associated waterproofing quality. Water running down the bladed colonnade lands in a perimeter drain filled with oxide ballast. The design allows for residual rust to be camouflaged in the pebbles, but to date there has been no run-off.

The marriage of form and material is RKA's high moment in the piece. The overall simplicity of the form and the honest expression of the weathering steel make its own language.

"Weathering steel is an evocative material and an important product, particularly in Australia," says Kirk. "In states like Arizona in the US, using this product without coating is good. You don't ever have to treat it again."