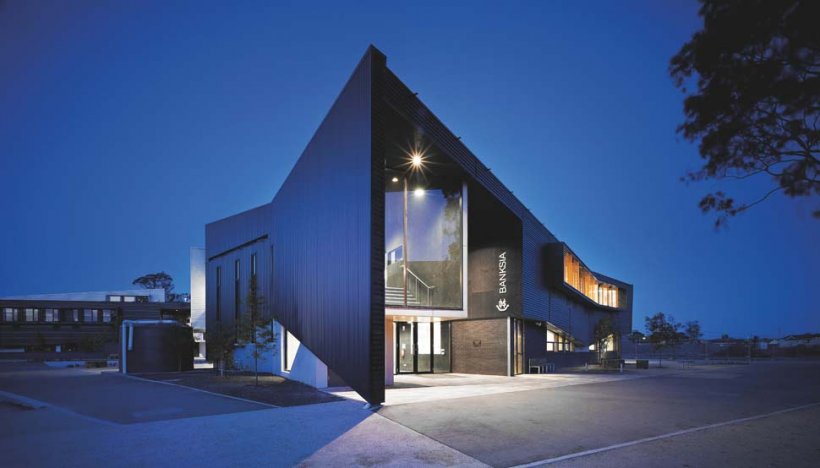 Victoria’s largest secondary school campus may look simple at first glance, but highly considered and tested theories of education and learning are embedded within these striking steel buildings.

When changing demographics brought about the amalgamation of three local schools to form Dandenong High School – with a student body of 2100, speaking more than 60 languages – there were many stakeholders keen to make a smooth transition. These included Victoria's Department of Education and Early Childhood Development (DEECD), the staff from each of the schools – three principals, three head librarians, three sports directors and so on – and architects Hayball, who grasped the opportunity to oversee major shifts in teaching culture.

Architect David Tweedie recalls that after 18 months of protracted briefings and workshops, there was pressure to commence construction, but the School wanted to trial the new teaching spaces before plunging in, so education interior designer Mary Featherston was brought in as a consultant, and the School used an existing classroom to test and prototype new spaces and teaching techniques with the students.

At the same time, Hayball suggested that the builders should commence construction of the outer shells – using an 'inside-out' construction method featuring steel cladding wrapped around pre-cast concrete – and insert later the best interior arrangement to emerge from the prototype classroom, a move the government client supported.

Each of the new buildings is a two-storey School Within a School (SWIS), expressed as two strands set at an acute angle to each other, with the central part having a pop-up roof with clerestory lighting. Stramit Longspan® made from COLORBOND® steel clads both strands, creating abstract volumes, without eaves or visible roof.

Steel plays a starring role at the entry to each SWIS, where a two-storey-high inverted L-shaped canopy is clad in Stramit Longspan® made from COLORBOND® steel that touches the ground. This is the only point where the malleable material is put within student reach, but in such a high surveillance area, it remains undamaged.

The architects deliberately created a bold visual effect with a 'super contrast' created by having the COLORBOND® steel in the lighter Shale Grey™ face the sun, while the darker Night Sky® faces the shade. Using the colours in this way meant that the relative reflection and absorption of heat also improves thermal performance.

Tweedie suggests that while the detailing of the COLORBOND® steel is not overly sophisticated, its versatility, simplicity and cost-effectiveness is incomparable.

The striking yet ultimately straightforward appearance of the buildings belies the planning and thought that went into their design and placement. "Two thirds of the design is not the buildings, it's about the change to teaching practice," Tweedie explains. The three original principals – all still at the school – sustained their passion for their project throughout: "Some of the staff are incredibly passionate about it," he says. "They tend to really support the buildings. That's been the most rewarding part."