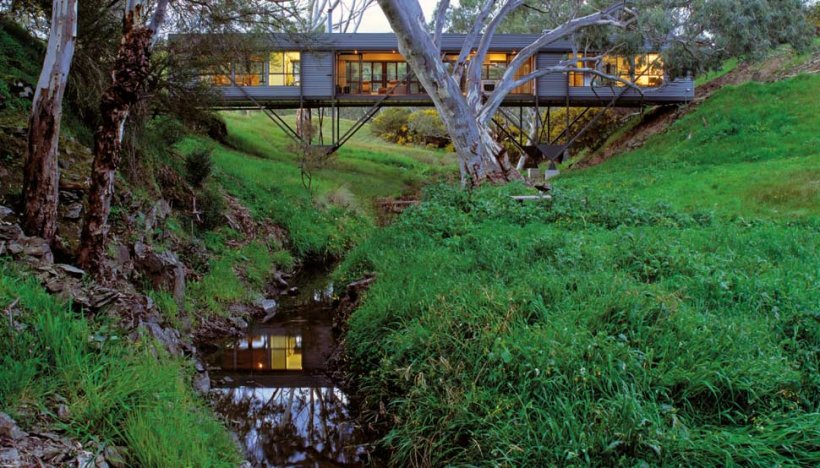 The owners of this small house never imagined being suspended over the creek on their hobby farm, but they’ve come to love Max Pritchard’s lofty idea of placing their home on a bridge.

Having admired a house they saw in a magazine that was designed by Adelaide architect Max Pritchard, the clients approached him and discussed their initial ideas. "He put forward an outlandish suggestion," says the owner.

"We were both taken aback initially. We are somewhat conservative and traditional people, and we normally wouldn't consider something so 'out there'. It was also hard to imagine being that high: we couldn't string ourselves out there to get an idea of what it would be like," she adds.

The unusual design raised concerns about securing planning approval for the bridge scheme, but the clients enthusiastically took up the challenge.

Over 12 months they jumped through many hoops and the plans eventually passed the scrutiny of the state development assessment panel.

Despite his faith in the design, Pritchard was slightly apprehensive on behalf of his clients. "I felt nervous doing a more original structure because of the relatively small budget," he says. "But I was confident that we could do it economically, because I knew a good steel fabricator who could do the job."

Once they secured planning permission the construction was relatively straightforward, with the limited material palette and the simplicity of the narrow plan making this an easy house to build. "Geoff Overall, the fabricator, manufactured the steel frame in large sections in his workshop in Adelaide, and it was transported to the site by truck," Pritchard says.

"It was craned into place in a couple of days, which is one of the big advantages of building with steel."

"It also helps that once the steel frame is in place, the rest of the house can be sealed up by one tradesman," Pritchard adds. "The roofer was able to clad the whole building in a short time, which made it easier on the clients, who were owner-builders.

"The concept of touching the earth lightly is very appropriate in this situation," Pritchard says. "For a building to only touch the ground at four points with four relatively small concrete pads that are bedded onto rock, it's a very minimal intrusion on the contours of the site."

The steel frame was instrumental to achieving that lightness, Pritchard says. "It would have been very hard to use an exposed truss in any other material that would economically span that distance."

"We had a relatively low pitch on the roof, and the Kingklip offers economy and a pleasing aesthetic for the box within the steel frame: it's a very simple roof."

While it was a challenging site, the simplicity of the structure and the ease of its assembly using steel components made the task of overseeing construction relatively easy, Pritchard says.

The structure suspended above the creek is an amazing sight to behold and the clients are convinced it was worth it. "We love that people say 'wow' when they come here for the first time," the owner says. "We hope that we don't ever lose that sense of wonder ourselves."